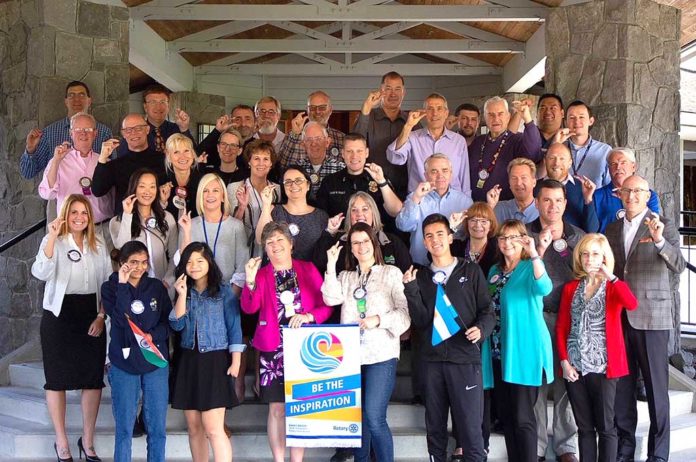 Rick Matthias was a founding member of the Tualatin Rotary Club. As the only remaining charter member, and one of the few members who have served as president twice, Rick is definitely qualified as a historian. The seed that started the Club was planted in 1981. At that time the City of Tualatin had about 7,500 residents. There was a dog food manufacturing plant in the center of town and the only existing service club was The Lions. There was no Tualatin High School and the city hall was an unimpressive cinder block building.

Under the direction of the Tigard Rotary club, six Tualatin business men met to explore founding a new club. With the guidance of Bill Maplethorpe and the commitment of these men, The Rotary Club of Tualatin was established in March of 1982. After a year of planning and searching, 28 members set a path that is still being paved today. Currently, the club has over 50 members.

Right from the beginning, the club focused its work on the youth in our community. High school youth exchange became a yearly mission. The first exchange student came from Brazil. Since then students have arrived from Europe, South America and Asia. Dozens of Tualatin High School students have spent a year abroad on these continents also. Returning exchange students have told us that their experience abroad was “A life in a year. Not just a year in their life.” This year, Tualatin Rotary is sponsoring a current Tualatin High School student in Austria and we have welcomed inbound students from India and Argentina.

Education of our youth is the mission for the club. The first high school scholarships went to Sherwood Students as Tualatin High was yet to exist. Every year since the High School was built, Tualatin Rotary has supported graduating TuHS seniors with scholarship money to attend college. For the past 7 years, the Club has chosen a first generation college bound graduate and awarded a four-year, $4,000 per year scholarship that includes mentoring from a Tualatin Rotary member.

In the beginning, the Tualatin Club had limited fundraising efforts, but that never stopped the membership from coming up with creative ways to fundraise. For years, the club’s main fundraiser was a Rose Sale. It also raised funds in connection with a car show, a berry sale, a Strawberry Jam concert at the High School, gumball machines and selling crawfish at the Crawfish Festival. Monies earned went to fund scholarly or humanitarian needs in our city and to support international projects.

In addition to fundraising the club membership also performed community service. From road clean-up and home rebuilding, to dictionary deliveries and holiday family support, the Rotary Club has had its eye focused on giving back and giving forward . One membership motto is “Service Above Self” and to this day it remains a centerpiece of the club’s focus.

There are two dates that changed Tualatin Rotary. In 1987, all rotary clubs welcomed women as members. Currently the club has a balance of male and female members. Many of the female members have been presidents of the organization. In 2011, an annual auction became the major fundraiser for the club. Thanks to the work of several members and the support of the community, The Wheel of Dreams Auction has provided funds for our Rotary Scholars and much more. This event will take place at The World of Speed on May 11th, 2019 and everyone is invited to attend.

The history of the club would not be complete without the mention of international projects and support. The eradication of polio, the establishment of schools, the provision of clean water and the health of children in developing countries have become passionate project for the Tualatin Club. Though matching grants and constant fundraising, the club has had an impact all over the world. The first international project was in Toledo Brazil and others have reached Cambodia, India and Central America. A project is now in the works for a possible preschool in Ethiopia.

For 38 years, Rick Matthias, a retired Tualatin dentist, has led the way for the Tualatin Club. He has seen the membership grow and the accomplishments flourish. He has been a part of an organization that has been able to retain eleven past presidents as members. He has been a proud member of a club that saw the rise of one member, Norb Murray, as a District Governor. He has watched as the foundation monies increased and the club’s ability to impact the lives of Tualatin residents expanded.

In the next year, Rick Matthias will leave the club and move to eastern Oregon. He is the club’s historian and will be deeply missed. His wish is that other service minded Tualatin residents will take up his mantle and become members of this vibrant club. If you are interested in joining, you can get more information at www.tualatinrotary.org.

Mask & Mirror presents Laundry and Bourbon/Lone Star at the Tualatin...

The Early Bird gets the Pre-Order