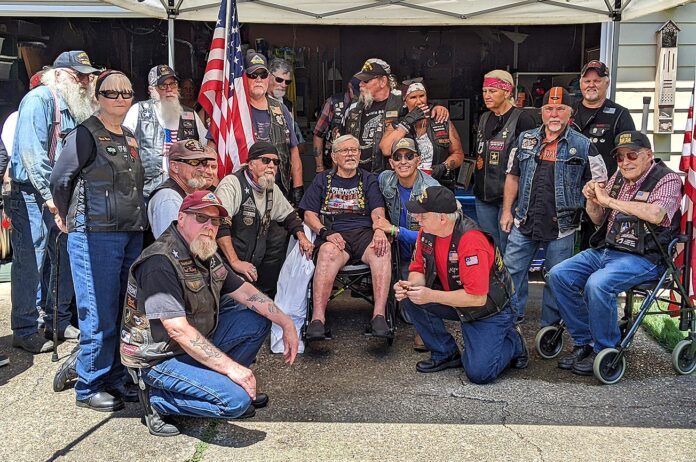 On Sunday, July 24, the Patriot Guard Riders did a ride-by parade for local veteran Jim Kruchoski. Jim is an Army Veteran who was recently placed on hospice. He has been in the Patriot Guard since 2007 and became a ride captain in 2016 until he fell ill and served on many missions with the Patriot Guard. A Vietnam vet and medic, he was in the country from January 1971 through April 1972 and earned the Bronze Star, Air Medal, Purple Heart, and a Heroism commendation for his actions on Nov. 29, 1971. There were numerous other awards as well. He returned in 1972 and was in the standby reserves from 1976-1977.

The entire neighborhood showed up to honor him, waving flags and watching the parade. It was wonderful to see so many people come out on a hot afternoon to support Jim and show that they appreciated his service.

The Patriot Guard was founded in 2005 to shield families of fallen heroes from those that might disrupt the services of their loved ones and has grown to include thousands of riders across the 50 states in the U.S. They are 100% volunteer, and as their membership has grown, it has expanded the scope of their mission. They also honor first responders as well as military veterans. They escort fallen heroes when they pass from their home to the funeral home and then again to the services. Additionally, they have an Active Help On The Homefront (HOTH) program, which assists our veterans and their families.

Publisher’s Note: Jim passed away the morning of Aug. 1. The Patriot Guard Riders were there again to escort his body to the funeral home.

A Season to Remember and a Quest for a Title