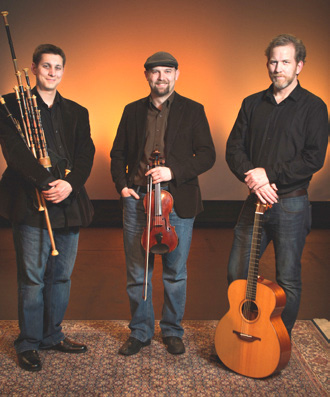 S&A Irish Entertainment is proud to announce Dréos, a Celtic ensemble of performing composers who create new music and reimagine old music using a traditional vocabulary, to the Winona Grange for as part of their 2nd Saturday Community Concert on April 8th

Dréos combines the blazing piping of Eliot Grasso, virtuosic fiddling of Brandon Vance, and powerhouse accompaniment of Glen Waddell, Dréos offers listeners exciting, handcrafted music in a living tradition, and brings audiences and students into a centuries-old cultural-artistic dialogue. Dréos has been engaging listeners in North America and in Europe since its inception.

The word “Dréos” comes from Scottish Gaelic, and translates into the English word “blaze” with the idea that it is light that helps us see the past, present, and future, and that it is the warmth of musical performance around which we gather for community and dialogue.

Innovation in traditional music might seem like a contradiction in terms for some musicians, but for Dréos, the two ideas go hand-in-hand. “Musicians in Ireland, Scotland, England, and Brittany have been writing original music for centuries” says Grasso, a Ph.D. in musicology and faculty member at the University of Oregon School of Music and Dance. “While in many instances, authorship of so-called traditional music is unknown, these tunes do have definite authors, even if we don’t know who they were. The traditional music that we play has a long heritage of change, innovation, and creativity. And, we think about our new compositions as being a continuation of that tradition of innovation. Often, we will use traditional forms and melodic ideas to craft something completely new. Other times, we will use traditional concepts as a basis for innovation as in, say, The Odyssey of These Days. What we want our audiences to take away from the listening experience at one of our concerts is an experience of the intense energy that drives performance and composition in Celtic music. We have worked to capture this energy on our first album, The Clearing, and are working on new musical ideas for our upcoming album to be released this year.”

Dréos’s debut recording, The Clearing (2015), was hailed by New York’s Irish Echo as “a taut, accomplished work that plays at the crossroads between Irish and Scottish music” and was named one of the top ten recordings by Folk, World & Roots Music in the year of its release. Their second album, The Odyssey of These Days, a recording of original chamber music written in response to the abstract paintings of artist Wesley Hurd, was recognized by the Oregon Arts Commission with an Artist Fellowship in 2017. Having performed for the William Kennedy Piping Festival in Armagh, U.K., the Irish World Academy of Music and Dance at the University of Limerick, Ireland, the World Music Series, University of Oregon, Northwest Folklife Festival, Seattle, and points beyond, Dréos offers compelling music, live and recorded.

The Power of the Positive