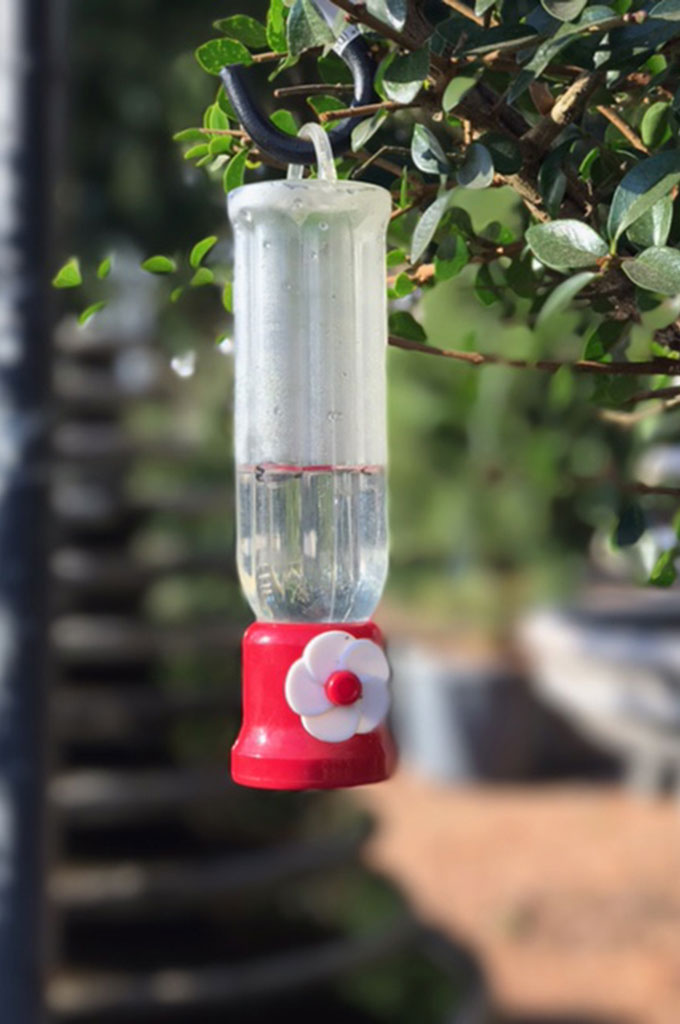 It’s funny I suppose that after selling so many varied hummingbird feeders and nectars for close to two decades that I’d actually try hanging a feeder myself. I swear I’ve seen them all. I’ve traveled to far away places like Birmingham England and Guangzhou China and Baltimore and Boston and Chicago to visit with company reps (full grown men and women by the way) that do nothing but create, and produce and sell hummingbird feeders for a living.

I’ve even been to a garden show in Las Vegas (of all places) and in the deep recesses of a giant temperature-controlled casino, in some great hall, I found myself at a ten by ten booth lit with Vegas neon lights and giant video screens of a continuous loop of just hummingbirds feeding. The virtual reality screens were impressive but somehow just not enough inspiration for me to survive the flight home.

That is, until a recent mid-winter visit to Linda’s house here in Tualatin while delivering of all things-hot coffee. (Insert here a longish story of gardening, friendship, and family, baked goods and well, dog training.)

Without a hint of exaggeration, the moment Linda answered her door one, then two, then three hummingbirds came to join our conversation. It wasn’t as if I hadn’t ever seen a hummingbird in the garden before. It’s just that I had never been so close or experienced those birds so unafraid. (Apparently I was standing in the way of their favorite feeder.)

I watched each bird intently. The winter sunshine lit them with a magical fluorescence around their collars. They had an intricate dance routine around the feeders. They moved with easy speed. They buzzed…and quite loudly hummed. I was filled with curiosity.

I left Linda’s inspired. I decided that Linda was the Pied Piper of Hummingbirds and I, who had been gardening for decades, who had spoken with so many company reps, who had sold feeders for years, wanted to be her apprentice.

I found out quickly though that its one thing to be inspired but it’s an entirely different thing to change that form of energy into direct action. The reason? There are so many things that can interrupt even the most determined.

It was Linda who lent me my first two feeders “These,” she shared “Are the ones that really work.” She gave me the recipe of their favorite nectar too.

Yet for two days the feeders sat on a counter empty. I had meant to mix the nectar and hang them but routine got in the way. As time wore on Linda sent me a small Mason jar’s worth to get me started. It was the push I needed.

As I hung each one I couldn’t help but doubt that even one stray, completely lost hummingbird would even find them. These were “Linda-certified”, proven feeders filled with their favorite nectar, but they were tiny, unremarkable and the world in comparison seemed too big.

The first day, I checked on the feeders often. As the evening set, a cold lonely remoteness of the two dangling plastic flowers in the winter wind only brought more self-doubt. Could I be doing something wrong?

I had to remind myself this was much like planting a seed or a bulb or a small tomato plant. It was going to take some time and patience and a good dose of faith.

By day three I had undergone a few trials of freezing feeders. And while I learned from Linda the hummers like to feed first thing in the morning it was often mid-morning by the time I had them ready. I hung the newly thawed feeders in the cold winter air and then briskly turned around to find work comfortably inside. Perhaps I didn’t have the consistency it takes. Was this something I had the wherewithal to keep up or would it be something that would eventually wear me down? That day I didn’t even glance back once towards the feeders.

By Day 6 I began arguing with my crew. A few thought the feeders were too close to us for the birds’ comfort. (I insisted I wanted to see them up close.) Some thought the sight of Mocha (our Australian shepherd) was too risky for them. Perhaps we should move them? I felt like it would be a sign of defeat and I didn’t want to start over.

The constant hope of experiencing a hummingbird’s daily visit was beginning to wear on me.

So on the verge of switching my thinking to the long game, tired of strategizing on the possibilities of why nothing was happening it was on the morning of the seventh day that we got our first quick visit.

There were four of us to witness it. Our morning conversations suddenly stopped mid sentence and we stood frozen watching the tiny bird. It found the feeder, paused, hovered, took a quick taste and darted away. The rush of satisfaction came over us immediately. It was like finding the first growing tomato, or a new bud on an early petunia. Or smelling the fragrance of Daphne on a warm spring day.

We couldn’t wait to tell Linda.

Of course on the day she visited us we suddenly had three hummers chasing each other, taking turns at the two feeders. (It’s as if Linda brought hers along.) I beamed with satisfaction. Linda had inspired me and added another lovely dimension to my garden. In a different way altogether though, she taught me the subtle difference between years of just knowing and actual doing. To that I’m eternally grateful.

Jonn Karsseboom currently enjoys hummingbirds almost every morning. He now sells more confidently feeders and shares Linda’s recipe freely to anyone who will listen. Email him at Jonn@thegardencorner.com.

Fall in Love with the Eight-Time Tony Award-Winning Musical

The Fruits of Summer’s Labor

A personal bond with me and Bob Maxwell, our nation’s oldest...