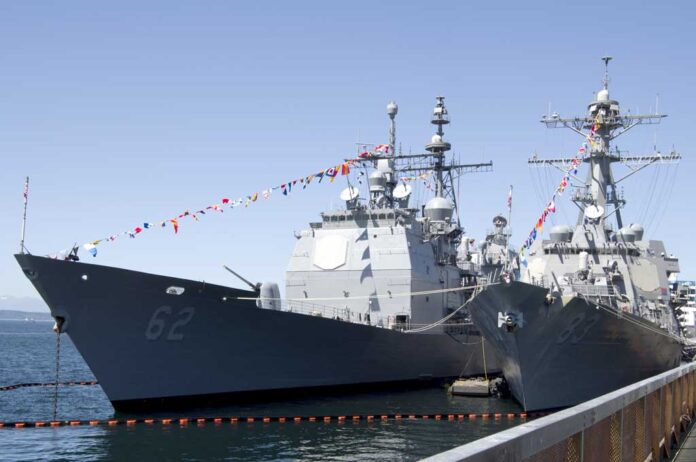 It doesn’t matter whatever way you enter naval service, be it book camp or officer training; everyone has to learn basic terminology. For example, the floor of a room or passageway is called a deck. The walls are called bulkheads, and what would be the ceiling is called an overhead.

The right side of the ship, facing forward, is starboard. The left side is port. I had no shipboard experience before joining the Navy so the way I first differentiated between those directions was by counting the number of letters for each word. “Port” has fewer letters than “starboard” and “left” has fewer letters than the “right”. So port is the left side. Might be a strange association system but it worked for me.

Historically, port and starboard came from Viking usage. The Vikings referred to the sides of ships as board. They mounted the steering oar, or “star” on the right side of their ships, leading to the term starboard. Because the oar was on the right side, the ship was tied to the dock at the left side. This was known as the loading side or “larboad”. Later it was decided that “larboard” and “starboard” were too similar to each other when difficult to hear over roar of a heavy sea, so the left side became the side “you tied up in port”, or the “port” side.

The Navy feeds well so those terms are important.  The galley is the space where food is prepared, like a kitchen.  The officers eat in the Wardroom, and the enlisted eat in Mess Decks. On larger ships, chiefs and other senior enlisted groups have their own special eating (mess) areas. Also on larger ships, the ship’s Commanding Officer (called Captain although might actually have another rank) has his/her own eating area. Ships and submarines with smaller crews can have different eating arrangements.

Other important terms include the bow, which is the forward end of a ship or boat. The stern is the after most part of a vessel. The fantail is the after end of the main deck and aft is the direction towards the rear stern. Forward is the direction towards the front of the vessel. A bathroom on a ship is called a “head”. This comes from the days of sailing ships when the place where sailors relieved themselves was all the way forward, on either side of the bowsprit to which the figurehead was attached. Splashing water would clean the area.

There are a number of phrases we commonly use that come from shipboard life. For example, “Above Board” means someone who is honest and forthright. It comes from the time when pirates would masquerade as honest merchantmen, hiding most of their fighters behind the bulwark (side/wall of the ship on the upper deck) – they hid below the boards. “Feeling Blue” means you are sad. It comes from a custom of old deep water sailing ships. If the Captain or an officer was lost during the voyage, the ship would fly blue flags or have blue band painted along her entire hull.

Very few people know that a “cup of Joe” originated from reforms by the 1913 Secretary of the Navy, Josephus Daniels. He inaugurated the practice of making 100 sailors from the Navy eligible for the Naval Academy and introducing women into the Service. After the shipwreck of a Navy in Chesapeake Bay, he abolished the officer’s wine mess aboard ships; making coffee the strongest drink allowed aboard, which over the years became a cup of Joe.

Another common term, “listless”, comes from the days of sail. Today it means to be dull or without pep. When a sailing ship was becalmed with no wind it had no list. No list is listless. “Taken aback” now refers to an experience where a person is jolted by unpleasant news, often at a momentary loss; unable to act or speak.  A sudden shift in wind (from a sudden squall), could blow sails back against the mast, a grave danger of having the masts break off and rendering the ship totally helpless. The ship was taken aback.

“Took the wind out of his sails” describes getting the best of an opponent or deflating his ego. Originally it described a battle maneuver of sailing ships.  One would pass close to its adversary on its windward side. That action would block the wind from the second vessel, causing it to lose headway.  Losing maneuverability significantly reduced ability to carry on a fight. “Three Sheets to the Wind” gives a picture of someone who has too much to drink, bedraggled with shirttails out, clothes a mess.  That refers to a sailing ship in disarray, with lines out of adjustment for the angle of sail in relation to the wind, flapping loosely in the breeze.

A phrase written on a seaman’s discharge, many years ago, that indicated he was still a novice, was “He knows the ropes”.  Then it meant all he knew about being a sailor was just the names and uses of the principal ropes (lines).  Now it means just the opposite, that the person fully knows and understands the operation of a job/operation.  The word “wallop” means to beat soundly or to strike vigorously. This comes from the 1500s. After the French burned the town of Brighton, England, King Henry VIII sent Admiral Wallop to teach the French a lesson. He so thoroughly wrecked the French coast, that ever since a devastating blow is known as an awful wallop.

“Hunky-Dory” means everything is O.K. It comes from a street named “Honki-Dori” in Yokohama, Japan whose inhabitants catered to the pleasures of sailors. A similar word is “Okey-dokey”.  “The Devil to Pay” primarily describes an unpleasant result from an action taken, often having done something they shouldn’t have.” Between the Devil and the Deep” is a dangerous position to be in.  The “devil” was the wooden ship’s longest seam in the hull. Caulking was done with pay (a type of pitch). The job of paying the devil (caulking the seam) by squatting the bilges was hated by every seaman. When at sea, the sailor had to be suspended on a bo-sun chair, a very scary position when the ship was underway.

Cannons played a key role in seafaring activity. “Long shot” is now a gambling term for an event that takes an extraordinary amount of luck. In early days, ships’ guns were not very accurate, except at close quarters. Thus it was a very lucky shot that hit its target from long distances. Originally the three-mile limit was the recognized ocean distance from a countries shoreline that a nation had jurisdiction over. This international law was established when three miles was the longest range for the most powerful guns, thus the longest distance that shore batteries could enforce. Now, international law and the I988 Territorial Sea Protection Act set the “high seas” border at the present 12-mile limit.

There are other fascinating terms that can be mentioned in later columns. But it is interesting that science fiction writers use seafaring terms to describe a spacefaring society. Using nautical terms for both the future and the past link the excitement and romance of the age of sail to future exploration and adventure.

Create your dream home this year